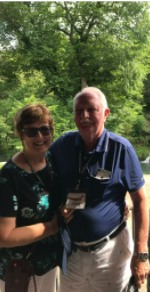 Each year Student Council Members of Flanagan-Cornell High School choose two community members to honor as the Grand Marshals of the Homecoming parade. These individuals have continued to show Falcon Pride throughout their life. This is the school’s way of saying “Thank you for all that you do; we really appreciate it.”

This year’s Grand Marshals are Mr. and Mrs. Gueldenhaar.

Mrs. Gerri Gueldenhaar graduated from Rich East High School in 1968. She taught for forty years, thirty-three of which were at Flanagan-Cornell. She was the scholastic bowl coach for twenty years, she took teams to the state tournament 4 times! She accumulated 7 Regional titles and 4 Sectional titles. Her W/L record was 545-347 with a 61.1% winning percentage. I believe you call that a legend!

Gerri was a dedicated Sunday school teacher at her church. In addition to that, she worked at the volleyball games keeping the book for the past thirty-five years and you still see her at the scorer’s table now. She continues to be one of our favorite substitute teachers after she retired ten years ago. Mrs. Gueldenhaaur also enjoys reading and doing counted cross stitch.

Mr. Lester Gueldenhaar graduated from Flanagan High School in 1963. He served in the United States Navy for four years. After completing his service, he worked at the post office for twenty-five years and was also the Parts and Service Manager for a shop that was uptown.

Les was in the Lions Club and the American Legion for fifty plus years and held a membership chairman position. He spends his free time fixing and working on cars, gardening and working outside, and even remodeling his home.

Together they have two sons and have been married for forty-nine years. Our community is better by having them as a part of it.